This picture was submitted by Chuck Renshaw. Thank you! 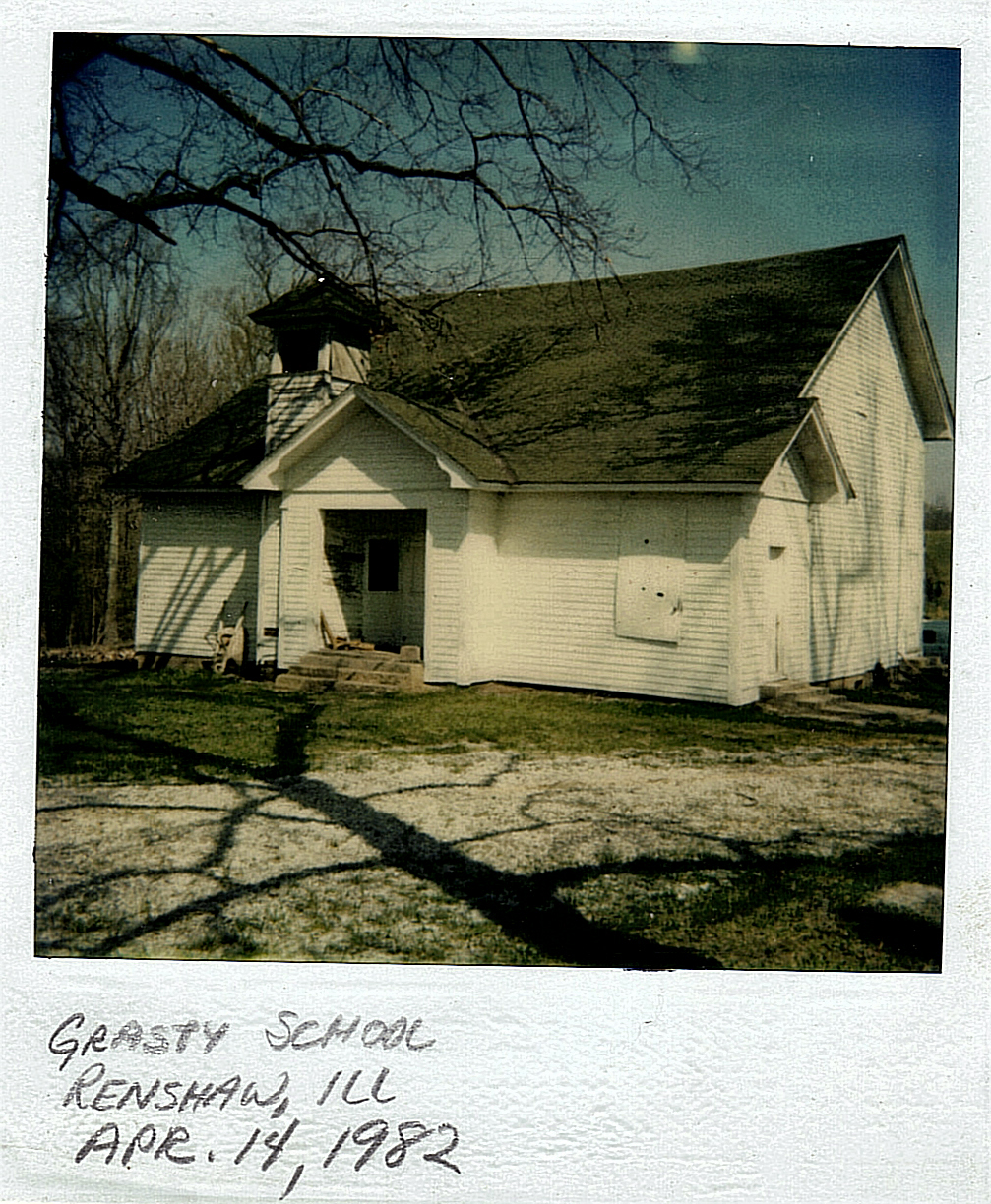 [The following is an exact transcription including typographical,

This was submitted by Laura Baumhueter Cordingley
Just an fyi .. my g-grandfather, Elmer Elsworth Renshaw was the postmaster for Renshaw in Pope County waaay back in the late 1800's. His wife, Rachel Watkins Renshaw took over the post upon his death. I've found many a relative on the Pope County site and am grateful for the information posted there. Thanks for all the time and attention you and the other volunteers donate. Laura Baumhueter Cordingley

HISTORY OF THE GRASTY SCHOOL

Unfortunately, no date of the one time log school house is found.

The only heating system the log house has was a huge fire place at one end of the room. Water for the school was furnished by a bubbling spring. The drinking utensil was a gourd dipper. Also the spring furnished a place for neighbors to water their stock.

The only toilet accomodation the school had in those days was a huge grove of trees.

Near the old school house stood two large pear trees, which furnished the boys and girles with golden delicious fruit in the late fall.

Mrs. Chloe BURGESS, recalls hearing her mother say what a wonderful school it was.

We are told that Mr. Thomas COX who is now deceased was a one time pupil who attended the Hayze school. However we are fortunate to have some of Mrs. COX's children with us today, also some of his grand children.

The old long school house changed hands in the year of 1879. Uncle Johnny SIMMONS as he was commonly called by his neighbors, purchased the old Mack HAYZE farm. It was known that uncle Mark GRASTY used the building for a storage house.

Later Mr. Stevenson PYLAND who is now deceased purchased the one time Mack HAYZE farm. Mr. PYLAND used it for a poultry house until he tore it down and built a large barn in its place.

Mr. Walter FULKNER is now the owner of the one time Mack HAYZE farm.

A new one room house was built on Mr. GRASTY's land. The school received its name "Grasty School" in honor of Mr. GRASTY who donated the land for the building.

The school house was built by a Mr. John TAYLOR. Little accommodation were furnished at that time. The only heating system the school had was a small long burning wood stove, which stood in the center of the room which oft times failed to thaw out the frozen lunches.

There were nails in the rear of the building for hanging up coats and caps.

There were no outside toilets at this time, thus the pupils were obliged to go to the near by woods. There was a well bucket and rope also one drinking dipper served for all of the pupils to drink from.

The school was supplied with a long recitation bench, where the pupils were called to recite their lessons. Also a lazy bench for the lazy pupils, who failed to get his lesson.

A birch rod had its place on the desk of the teacher so it would be handy if in case it should be needed. It was no uncommon thing to see papers wades or love notes go flying across the room when the teacher was not looking.

Many improvements took place at Grasty school, such as a new furnace with a jacket which circulated the heat a belfry was built and anteroom added on the school house, where the boys and girls could hang their coats and caps to keep their lunches. Private drinking cups were furnished. New seats and desk graced the school room. Two out side toilets were built.

Occasionally the school would have a pie supper or a box supper to raise money for buying extra needs such as new dictionaries, wall maps kerosene lights and reflectors and also an organ.

The best of the teachers would be hired to teach the schoo. Thus the school was known as a "Standard School'.

There was much enjoyment at the Grasty School in the good old days. At recess the noon hour, many games would be played by the pupils. Such as Old Aunt Jane, needle-eye, drop the hankerchief, stink base, cat ball, anta over the house, Pennsylvania and many others. On Friday afternoon, if the pupils had been good and studied their lessons well the teacher would permit the change of exercise, such as an adding match, spelling match or a geography race or a query box some time there would be company to visit the school some one like your sweetheart.

At Thanksgiving time, the teacher would help the children with a program in honor of our Pilgrim-forefathers. Scenes would be drawn by the pupils on the black boards. People would come for miles around to hear the program which the faithful teacher had drilled the pupils on.

At Christmas time, like wise a program would be given. In those days the pupils were taught to make a polite bow then recite the reading. There would be dialogues, pantomines, tableaus and songs.

Strings of pop-corn and paper chains with tallow candles would furnish the decoration for the large cedar tree which would be placed in one corner of the school room. On the black boards Christmas scene would be drawn by the pupils.

Mistletoe was sure to find its proper place over the door. In those days the girls were very superstitous.

Best of all old Santa would would come bringing treat of candy and oranges, for the pupils. Each pupil in the school was obliged to draw names at Christmas time and present a gift for the name they had drawn. It was nothing uncommon among the older pupils to exchange names in order to have their sweethearts name so called in the good old days.

A bag of asafetid, tied on a string and wore around the neck, was a sure cure for contagious diseases such as mumps measl3w, wcaralet fever, whooping cough, itch, boils and carbuncles.

Last, but not least, would be the last day of school with a big program. School would take up as usual. The pupils would repeat the Lord's Prayer of the teacher would read the 23 Psalm. Roll would be called then the pupils would sing while one of the gifted pupils would play the organ. There would be the regular classes which the faithful teacher had drilled the pupils on, in order to make a good impression on the parents.

At noon a big basket dinner would be spread on the ground upon the house wives best linen. Grace would be given and after every one had been filled with all the goodies which had been prepared for this splendid occasion the school would take up with an afternoon program. A long talk would be given by the County Supt. of the schools which made the boys and girls fidiget a lot next. Next would be short talks by the school directors. There would be a welcome by the smartest little tyke in the school, also readings, dialogues, songs and monologues by the pupils. Also talks by the teacher and older people.

Then there would be a benediction.

Many improvements took place as the years went by such as electric lights, inside water fountains, cooking accomodations where the children could have hot lunches at noon.

For many years the old school house stood idle. On Cot. 3 1965, our first school mate reunion was held with an old fashion dinner and a program which was enjoyed by former teacher and old pupils. Election was held, officers were voted in to have our next Reunion at Dixon Springs Park on Aug. 14 1966.

On Oct. 30 the old school house was sold to Mr. Ralph COX one of the former pupils.